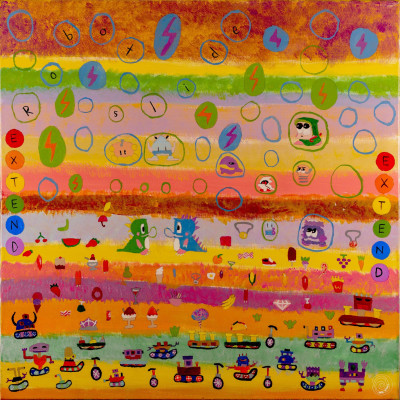 Robot Slide is a guitarless rock band from Saint Paul consisting of three brothers, Matt, Jake, and Todd Olson and their good friend Liam Moore. The spirit of sibling play is channeled in their music, though their Lego sets and Nintendos have been replaced by an array of vintage keyboards, synths, and samplers.  In combination with tight vocal harmonies and grandiose orchestral arrangements, these colorful blocks of sound are patchworked together to build whimsical, imaginative, humorous, and sometimes bizarre songs in their first full-length release, EXTEND.

"Le goose" is a song about mothers or maternal figures or people that just make you feel okay for being exactly who you are, no matter what.  This song weaves its way through many different textures, from dreamy ambient cello sections to groove-driven keyboard pop. At the end of the song, you can hear samples from the Olson brother’s home videos, which include the voices of their own mom and grandparents!

"Robots" reflects on the difficulty of maintaining long-distance relationships through digital communication, in a time when close friends, lovers, and family often find themselves scattered all over the world. The glitchy synth bleeps and bloops, along with nonchalant telephonic vocals, mirror the frustration and resulting apathy of trying to connect through the computerized divide.

"Ezbreeze" is Robot Slide’s manifesto of sorts.  The optimistic lyrics point to the tedium and intensity of our most important relationships but also their profound rewards.  Starting with hushed vocals and a Wurlitzer keyboard, the song opens up into a cathedral-like space with reverb-drenched organs and an emphatic trombone chorus.  As the band quiets back down, Matt sings what seems to be a self-assured mantra, “Like little dogs or paper dolls, I could live here in a basket, with just a few who really know me–who trust that we’ll make something from some things–who help me feel a bit less small!”