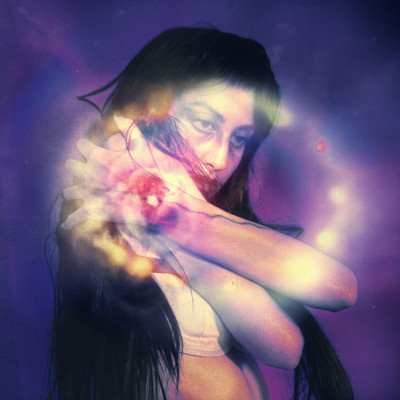 The artist formerly known as Jasper Lotti has described the sound that she’s carved out with her two EPs—2019’s XOskeleton and 2020’s Kiss Tha Future—as dystopian pop that untangles the existential anxieties bound up in trying to reconcile our digital personas with our IRL senses of self. Her upcoming full-length debut, Priestess, marks a more expansive and esoteric shift that brings her sound in more playful, carefree, and empowering directions, and one where she embraces a new moniker: YULLOLA. She considers this more of an entity than any sort of persona that’s fixed in time and space that can fluidly shift in and out of different characters and narratives. She came up with this new name after coming across the Sanskrit word ullola in the index in one of the books in her grandparents’ massive spiritual text collection in their home library in Tennessee. Ullola means giant, surging waves, like the ones that overtake your senses when you witness a storm at the ocean in the middle of the night. The dual nature of these waves—their intensity and their delicate structure—is a fitting encapsulation of the conceptual and sonic world that she’s built around Priestess.

YULLOLA’s always been interested in darker sounds. Growing up in White Plains, New York, she was influenced early on by her family’s spirituality, whether it be the sacred texts that her grandparents collected or her mother’s Reiki practice. She first learned Hindustani classical music as a child, and she says that she was always drawn to the minor ragas. Her obsession with darker aesthetics only spiraled from there, and it’s a sensibility that she weaved into the warped beats of XOSkeleton and the acoustic-flecked compositions of last year’s Kiss Tha Future. She’s written and produced her entire catalogue herself in addition to self-directing her own videos and visuals. It’s an independent and self-contained songwriting process that she continues with Priestess.

She admits that all pop nowadays is cast with a dystopian shadow given the current state of the world, and YULLOLA’s adapted by pushing her focus in more fantastical directions. Bringing together her vast knowledge of anime, ancient Japanese and Hindu mythology, and her keen interest in cosmology, the YULLOLA of Priestess is a goddess of black holes and the purveyor of priestess pop whose outsider status allows her to playfully skewer both the modern world and pop archetypes. YULLOLA had already developed a fascination with black holes, and she even reached out to researchers at MIT and Brown to investigate them further, learning about the intricacies of the event horizon and how time essentially slows down to a halt within them. These scientific conversations were built upon her pre-med background, which she pursued for a few years before committing to music full-time. Her research and her heritage all came full circle when she realized that the powerful Hindu goddess Kali, who YULLOLA describes as channeling a sense of primordial creation energy, is symbolized by a black hole. She then created a narrative of YULLOLA, a priestess trapped in a black hole who uses her powers for good. She’s lonely in her vortex, and eventually she escapes the event horizon to look after an egg that she finds floating alone in the universe. She develops a curse mark on her hand after leaving her black hole, and as she travels around with the egg, this curse mark grows. It’s a story of creation, coping with change, and the process of trying to understand the world around you when your worldview is always shaded with a preternatural sense of alienation.

YULLOLA weaves this narrative into the sounds of the album itself. She samples star sonification data from the Chandra X-ray telescope, and she imagined YULLOLA making wonky, cheeky dark pop music to try to relate to others. She envisions her as an alien priestess trying to make sense of the human experience through music, one that mirrors her own relationship to music and society at large. It’s a detached perspective that allows her to craft uncanny music that approximates archetypal dance tracks and love songs while always landing a bit off-center from these marks. On the surface, “Afterglowow” is a typical love bop—she asks that her baby kiss her through the phone at one point—but she also admits that she exists out of time, which turns the whole scenario into more of a supernatural love connection. “Mousse” is YULLOLA’s take on a dance track, and though there’s some of what you’d expect from a club track—there’s talk of DJs on one side of her, a room full of bodies, and people vibing with each other—she also sings about dancing like a dinosaur and looking like a carnivore. Even when she sings in Hindi, as she does on “Slather Lather Pyaar,” which folds in some concrete cultural context into this heady universe, the words don’t make any logical sense together. They’re more like a raw and random assemblage of words that YULLOLA’s strung together more for the way they sound than what they mean. “Is It Love or a Pyramid Scheme” is perhaps the best example of YULLOLA’s outsider status. In a sort of alien monotone, she can’t quite put her finger on whether what she’s feeling is real or if it’s some sort of unsustainable ruse.

Priestess’ esotericism is rooted not only in feeling alienated from the human experience, but also a desire to return to a sense of childlike levity. “We’re all so traumatized and tired of being human and existing in capitalism,” YULLOLA says of her decision to write from the perspective of an alien pop priestess. “I just want to give people an escape. It’s empowering and cheeky, but I’m not directly writing about the human experience.” Taken together, the songs are lighthearted satire that push us to question why it’s so hard to relate to one another and to get back to a sort of childlike appreciation for pure love, one that upholds the beauty and empowerment of dark-natured and divine feminine spirits. Even as YULLOLA tries to make sense of earthly behaviors and society, she creates her own otherworldly sonic universe that’s just as fascinating and inscrutable. 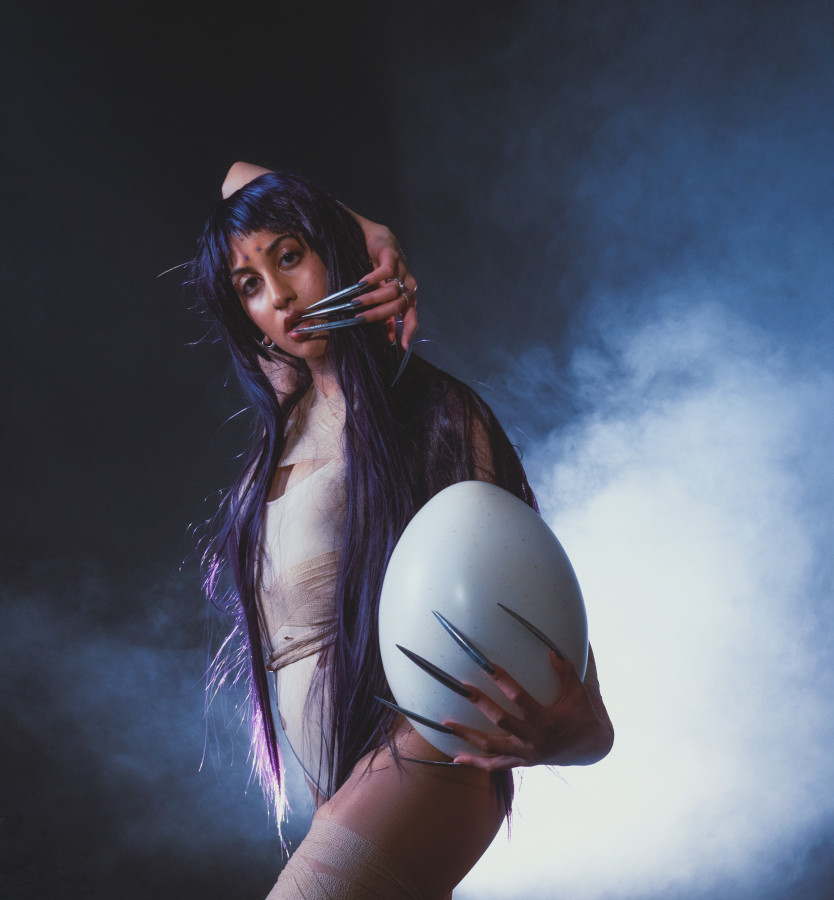