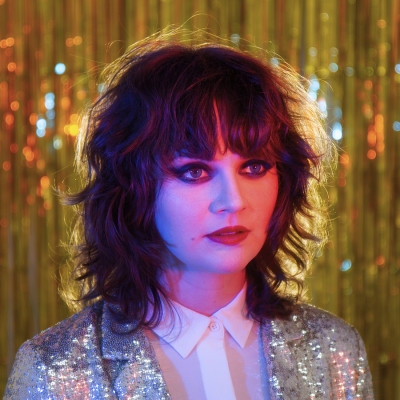 Trophy: (tro·phy /ˈtrōfē/) noun. a cup or other decorative object awarded as a prize for a victory or success.

Kate Davis picked up a violin at age five, a bass at age thirteen. She entered the Portland Youth Philharmonic before puberty, the Grammy Jazz Ensemble before adolescence. By the time she graduated high school, Kate won the Presidential Scholar in the Arts Award and a full ride to the Manhattan School of Music. By the time she graduated college, ASCAP's Robert Allen Award and slots at Carnegie Hall and Lincoln Center. As a young adult, the virtuoso claimed enthusiastic endorsements from NPR, MTV, PBS and BBC as well as coveted invitations to the stage from Herbie Hancock, Ben Folds, Alison Krauss, Jeff Goldblum and the like. Most recently, she co-wrote Sharon Van Etten’s hit single “Seventeen” and contributed to the soundtrack for blockbuster ‘Five Feet Apart.’

Kate grew up as a jazz darling, but she grew into something significantly more dynamic. Days spent practicing and performing became nights spent writing — cathartic indie rock — music simultaneously informed by and rebutting of her training. Forbidden chord progressions emerged like diary entries, documents of an internal reaction to routine. Time intended for technique slipped into secret listening sessions of Beach House, Elliot Smith and TV On The Radio. In the same bright, arresting croon that ignited her youthful stardom, Davis created confessionals.

Now 28 and audibly matured, Kate is prepared to properly share the artifacts from her late night craft, a full length reaction to ritual required of perfection, an outburst from the pedestal. Throughout twelve tumultuous tracks, she poetically reflects upon the intricacies of what it is to live, ruminating on topics too close to her heart — identity, self-worth, loss. Trophy will be released November 8, 2019 on Solitaire Recordings.

In album opener “Daisy,” Kate confronts the death of her father with an ode as enthralling as it is devastating. Lyrically, she blends the hard work of questioning with the intuitive work of honoring, thoughtfully satisfying a desire to respect her deceased parent as well as herself. Melodically, she offers a lightness almost grotesque in contrast to the words it lifts. The process is uncomfortable, enveloping and beautiful — much like grief giving way to acceptance.

While you’re down there in the ground

What do I do when you

And crashing down to the ground

Backbone is battered as any

But show me my roots

Kate delves fearlessly into the aimless dread of early adulthood in songs like “Dirty Teenager,” an infectious romp refreshingly reminiscent of the early aughts and “rbbts,” a slow-burning anthem of need. The latter is named after a now-closed restaurant in Soho, which Kate frequented during a manic time in her life. She considered the establishment a safe haven then, but retroactively reduces it to metaphor — a healthless attempt to make comfort where it doesn’t belong. With ominous nonchalance, she articulates a despair for stability over growth.

you can’t ever hold on too tight

The skin will slip away

and in no time

Kate’s nuanced perspectives and inventive lyricism triumph in tracks like “Open Heart,” a danceable dirge that equates heartbreak to sterile surgery and “Salome,” a biblical rendering of interpersonal dilemma. Few writers so snugly meld the personal with the literary without compromising one moment of emotion.

barefoot with my head

I warned you of the

Kate lets vulnerability lead on “I Like Myself,” a delicately penned love letter to self. With a sobering level of sincerity, she recognizes her reliance upon others’ approval and the vicious toll it takes on self-esteem. She delivers her poignant epiphany with the tenderness of tone one might use when speaking to a mirror. Humility marks the standout song and echoes throughout the remainder of her debut.

I finally love myself

Cause she loves me

And since I think the

And she of me

I’m exactly who and

where I want to be

Kate’s observations are at once wise and inquisitive, treating confusion and conclusion with equal care, serving simultaneously as stories and studies. The songwriting resembles psychology — and hers alone. In deliberate escape from former record deals, partnerships and influences, the album was intentionally and exclusively created in accordance with her individual vision. Kate recorded it at Mission Sound in Brooklyn, with producer and friend Tim Bright.

Trophy — is exactly that — a shining culmination of personal lessons learned, an award acquired from the task of existing.