For Nandi Rose, writing a song is an act of transformation. As Half Waif, Rose pieces together the patchworks of our darkest and most vulnerable moments with a golden thread, crafting a majestic evocation of the human experience that permeates with a graceful strength. On new album Mythopoetics, the Hudson Valley-based artist breaks the familial patterns handed down to her, transforming this source of pain into something bearable, beautiful and celebratory. It is an essential reminder that we have the power to shape the stories we tell and the myths we make of our lives.

Half Waif’s previous albums The Caretaker (2020), Lavender (2018) and Probable Depths (2016), garnered acclaim for their compelling journeys through solitude, desire and the search for independence, blanketed under a spectacle of deeply-layered synth-pop. Her fifth full-length sees her stretch her creative muscles, as Rose pushes through the barriers of self-scrutiny and transports us into a world of mythic proportions. Charting territories of addiction, memory and loss, Mythopoetics is animated by the traces of what’s been left behind: the ghost of orange blossoms, the tail of a meteor across the sky, the taste of loneliness in a crust of bread. It is a kind of modern-day storybook where memory is spun into song and the self is explored and acknowledged with tender, nourishing care.

To bring together the world of Mythopoetics, Rose once again collaborated with multi-instrumentalist, film composer and producer Zubin Hensler. The pair came together for a recording residency at Pulp Arts in Gainesville, Florida, with the intention of creating stripped-back recordings of old songs, solely focusing on Rose and her piano. However, the playground of the studio soon transformed the project into a texturally diverse and kaleidoscopic sonic universe.

“There was a real excitement and joy to see how we had each progressed and evolved since we’d last worked together and how those skills really complement each other,” Rose explains, adding that Hensler’s experience in taking acoustic sounds into an electronic world allowed Mythopoetics to bloom. But despite moving away from the original sonic intention of the record, the pair were keen to keep the organic nature of the sounds, performing every instrument themselves and turning to unconventional methods—like agitating the strings of the piano with the sustain pedal down or placing tin foil over Hensler’s trumpet—to stretch the palette in new directions.

This innovative nature pours over into Rose’s vocal performance, which resonates with a potent, impressive force. While she’s always been a generous singer, Mythopoetics sees Rose explore new territory by extending into a full spectrum of sounds: from the gentle trill of album opener “Fabric” and the urgent swell of “Sourdough” to the cut-up samples on “Take Away the Ache” and “Fortress,” it’s Half Waif proudly declaring a new chapter. “This is the record I've been trying to make for 10 years,” Rose says. “My voice is changing, and my confidence has reached a point where I feel that I can sing however I want; I’ve finally come to a place where I don't have to conform to what I think other people want it to sound like.”

By unearthing this kind of self-assurance, Rose was poised to interrogate her life with a new lens. Lead single “Swimmer,” a song that examines the effect Alzheimer’s has on a loved one, sees Rose strive to use her voice as a tool for communication and healing. “I wanted to sing for you / So I'm going to sing for you,” she urges. “I thought of the voice as a wand, trying to reach across this boundary and remain connected with someone who's slipping away,” she says. Later, this theme of loss and mortality is reflected in “Take Away The Ache” and “Fortress.” Questioning the lengths we go to for those we love, there’s also a fearful undertone of one day losing a cherished relationship or connection. “There's a certain amount of lying in loving. We ask so much of each other, yet there’s only so much we can do,” Rose says, adding that even as she’s experiencing the greatest love of her life with her husband, there’s the inevitability of losing him someday, making her intensely vulnerable. “I feel like I am just so crushable,” she says. As a comfort to herself, Rose plans a garden for whichever one of them lives longer on the ethereal “Orange Blossoms.” The flower is another trace of what’s been lost and what’s remembered, a spectral trail to follow through the dark of the future.

The latter half of Mythopoetics dives into the darkened underbelly of capitalism’s effects on creative freedom, as Rose telescopes outwards from themes of breaking familial patterns to breaking societal ones. Pop banger “Party’s Over” urges us to seek out our own individual path, to “keep walking” despite our tendency to compare ourselves to others, while the propulsive “Horse Racing,” written at the very beginning of the pandemic, seeks to challenge the suffocating and destructive cycles of a COVID-ravaged world. “I’m not trying to make you nervous / But I think that we deserve this,” she sings, as “a way of assessing and trying to break out of these repetitious systems, like a horse breaking off of its track.”

Towards the end, we’re met with “Sodium & Cigarettes,” where Rose vows to “believe in something more than what's in front of me,” no longer running from her inherited problems or expecting somebody else to save her (a theme echoed throughout the twelve tracks). Quiet closer “Powder” continues to point to the power of transformation, with “a vacant lot, a little scar,” offering a blank canvas to start your story from scratch, the way you want to see it written. Watching the meteor pass, Rose dissolves away from the sight of that pain. By creating a sense of distance, she tells us, we can see things for what they are.

Mythopoetics is an album about processing past traumas in the quest for a new, sun dappled pathway, and the transformation that takes place as we take each tentative step. The artwork, shot by Ali Cherkis, sees Rose screaming in bright colors on the front, and naked, with a stoic expression on the back, representing the spectrum of emotions explored throughout each track. Change, evolution and joy take real courage, and it’s in the catharsis of telling your story that the calm, confident aftermath can finally reach the surface. Here, Half Waif is shunning the shadowed mass of generational trauma and the patterns passed down to her. Instead, she plants a seed, urging the orange blossom to sprout through the cracks in the concrete. 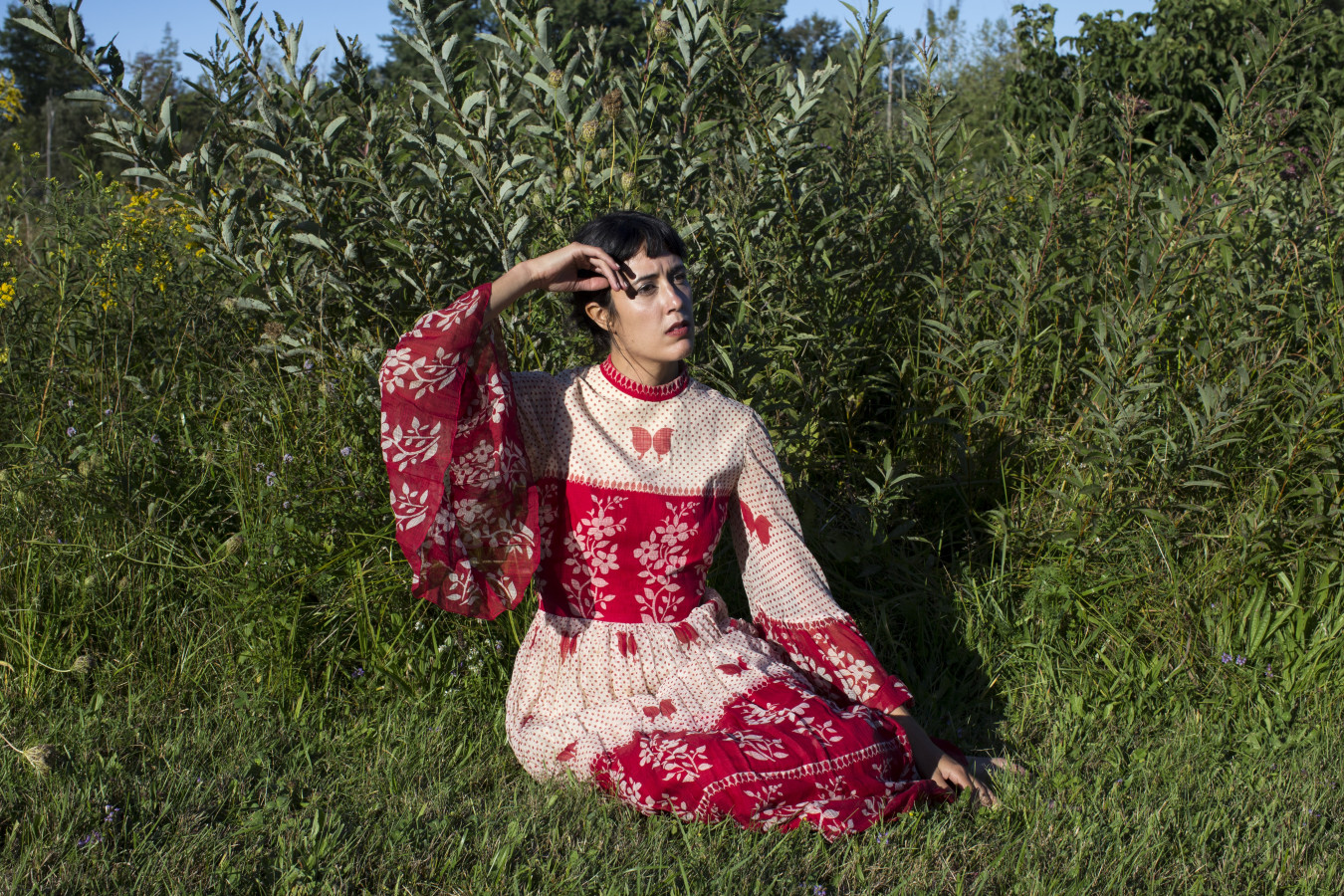